Director Shankar has earned the reputation of one of the biggest showmen in Indian cinema, a tag he has retained for the better part of three decades. He is currently shooting his next pan Indian grand spectacle ‘RC15’ starring Ram Charan Teja and Kiara Advani in the lead roles.

Meanwhile, his younger daughter Aditi Shankar has made her acting debut in a grand manner as well. She has been signed to play the lead heroine in ‘Viruman’ produced by Suriya and starring his brother Karthi in the lead. The film is directed by Muthaiya and has music by Yuvan Shankar Raja.

Aditi Shankar on Friday met Superstar Rajinikanth at his residence and sought his blessings ahead of her foray into films. She wrote on her social media “On the auspicious day of Vinayagar Chathurthi yesterday, got to meet the one and only THALAIVAR @rajinikanth sir and got his blessings.” 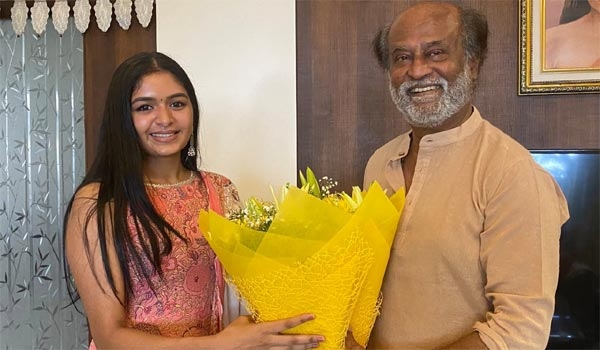 Rajini who has worked with Shankar in two blockbuster hits ‘Enthiran’ and ‘2.0’ wished the young doctor turned actress the very best…