The teaser for Shahid Kapoor’s upcoming film ‘Jersey’ has received a huge response from fans, and Kiara Advani is no exception, as she expressed her support for her Kabir Singh co-star.

The Good Newwz star took to Instagram to write a letter beside the film’s trailer, in which she continued to explain, “The screen has missed you SK! Looking forward to Jersey!”

The 29-year-old actress also expressed her best wishes to Thakur, saying, “ I know how special this film is to you. @Mrunalthakur You are just so lovely on-screen. Love and best wishes to the entire team.”

The actor’s heartfelt request elicited a response from the Jab We Met star, who re-shared the actor’s Instagram story with the caption, “Till we meet again Preeti ji.” 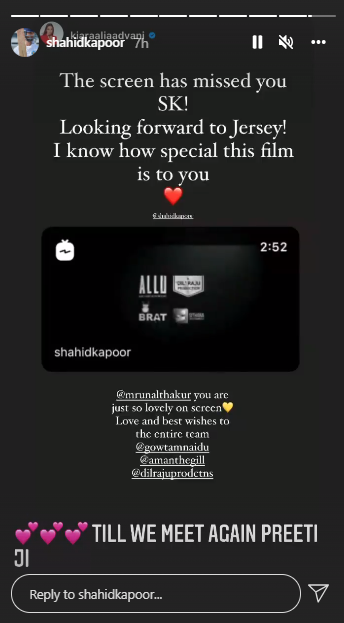 The film, which depicts a cricketer’s return, is set to enter theatres on December 31, 2021.